Microelectronic devices are very prone to contaminations and even the smallest dust particles can have a negative impact on the product quality. However, the analysis of electronic devices is a complex task since modern systems are highly miniaturized and composed of all kinds of different materials.

Knowledge about the chemical composition of a contamination will in most cases reveal the origin and therefore allow effective troubleshooting. Fourier-Transform-Infrared (FTIR) microscopy is an attractive tool for the analysis of very small structures down to the micrometer range and is capable of identifying not only organic but also inorganic components. By using interference patterns (fringes), it is possible to determine the thickness of insulation layers in the micrometer range.

Raman microscopy provides the option to even analyzing structures underneath glass or transparent protective polymer coatings.

Analysis of Particles and Surface Contamination

Example: Examination of a contaminated CMOS-Chip

The image below shows the corner of a CMOS-imaging chip. In order to identify the particle in the upper left corner (blue arrow) measurements were performed on the particle and also on different parts of the assembly. 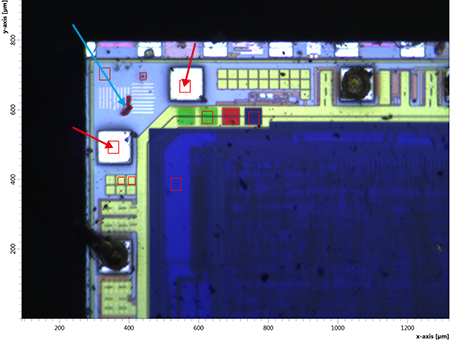 Many visually different positions on the chip have a similar spectrum (green). This shows that most of the surface is covered by a protective coating which can be identified as the polymer “Poly (methylmethacrylate) : Butadiene”. As an exception, the two rectangular contact areas (red arrows) are showing no absorptions over the whole mid-infrared range which indicates clean metal surfaces (see red spectrum below). The other exception is the contamination in the upper left corner (blue arrow). The resulting spectrum (blue in the image below) clearly shows that the contamination is a polyamide / protein. 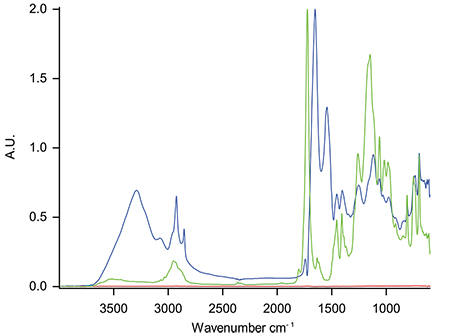 Defects in Coatings and Insulations

Enameled copper wire is mainly being used to build electronic coils and has typically diameters in the range of 0.02 – 6 mm. On modern wires, usually a very thin insulation from polymer film is applied. Defects in this coating can have dramatic effects like leakage and short circuits that may ultimately result in the destruction of the whole circuit.

The homogeneity of the coating layer thickness was analyzed by performing a line of reflection measurements on the wire surface. Reflection measurements on thin layers result in so called fringes in the IR-spectrum resulting from internal interferences. These fringes manifest themselves as a sinusoidal baseline of the spectrum and can be used for layer thickness determination. The image below shows a color coded mapping of the layer thickness superimposed over the visual image. A height of about 25 μm was determined for a wide area of the wire.

However, a defect in the insulation layer shows a crack where the layer was removed and a thicker area where the excess material was moved to.