Analysis of Particles, Contaminants and Inclusions. 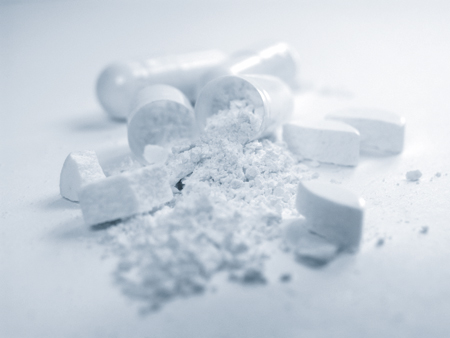 The detection and search for the cause of product failures in pharmaceutical substances is especially important since these types of defects are potentially harmful to the patient. Thus, pharmaceutical products are highly regulated and defects are not tolerable.

To prevent mix-up of components in the manufacturing process IR and Raman spectroscopy are widely used by pharmaceutical manufacturers for verifying the correct identity of incoming raw materials. In failure analysis, FTIR and Raman microscopy are ideally suited to determine the chemical nature and the origin of all kinds of particles, inclusions and other microscopic contaminations.

Raman microscopy even allows to measure inside of closed transparent containers and within water based formulations without the need to isolate the particles.

Example: Chemical identification of an inclusion in a tablet Pharmaceutical tablets have to be free from inclusions. If an inclusion is detected e.g. by visual inspection its chemical nature has to be determined to raise the chances finding its origin. The figure below shows a white tablet with a yellow spot inside. To discriminate the inclusion from the general matrix of the tablet a series of positions was measured on the yellow spot and next to it. Using the fully automated ATR (Attenuated Total Reflectance) mode of the LUMOS II the region of interest was analyzed without any sample preparation. 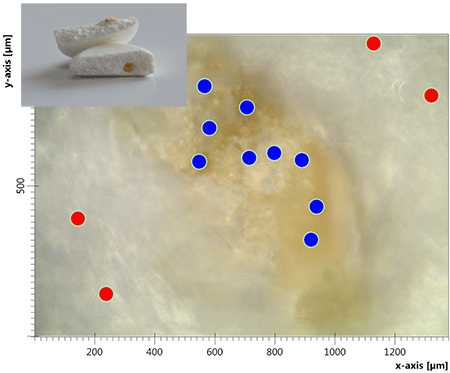 The next figure shows the visual microscopic image of the inclusion inside the tablet together with the measurement positions. The spectra are colored according to their position. It is obvious that the spectra measured on the inclusion (blue) have a much different signature than the ones on the general matrix of the tablet (red). By searching a digital spectra data base the chemical identity of the inclusion was identified as stearate. 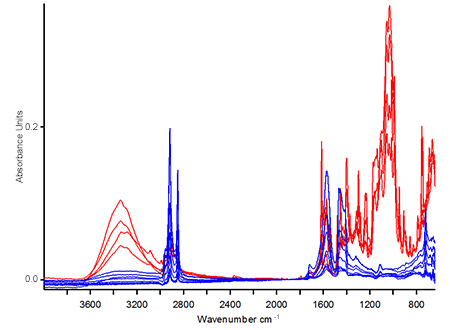 Particles in liquid pharmaceutical formulations are a potential health risk for patients. Therefore, great care is taken to avoid particle formation in the first place. Any detected particles are analyzed thoroughly to find and remove the reason for their appearance.

FTIR microscopy is a powerful technique to determine the chemical identity even of individual particles. Before the IR analysis, the particles have to be isolated, washed and dried in order to perform a reliable spectroscopic analysis. As an example, the image below shows particles isolated on a gold filter.

Confocal Raman microscopy even provides the option to analyze such a particle directly inside vials or syringes without any sample preparation. 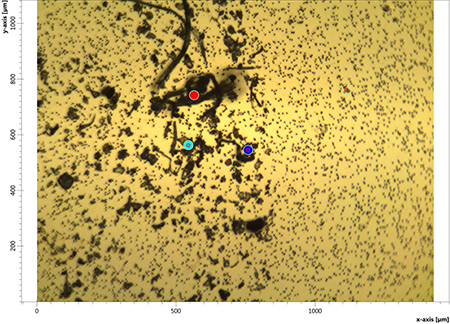 Example: Distribution of API´s and excipients determined by Raman imaging Tablets are often complex mixtures of active pharmaceutical ingredients (API), fillers and excipients. Knowledge about the distribution of the single ingredients can help to improve product quality and to detect improperly mixed tablets. The image below shows a high resolution Raman image of a painkiller tablet. It visualizes the distribution of 3 different API’s: Caffeine (green), acetyl salicylic acid (blue) and paracetamol (red) on top of the visual microscopic image. Altogether, 100x100 single spectra were measured in less than 5 minutes. 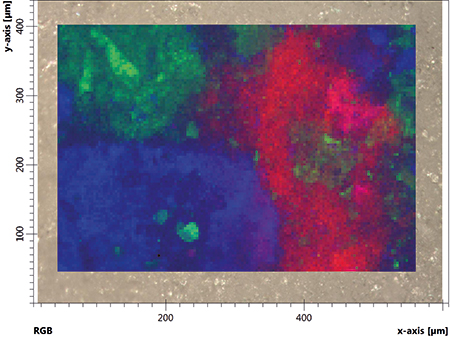